A Smell of Turmeric and Tajine

Smell of turmeric and Tajine waft through the streets of my little village.

Oh Habibi Ya Habibi Yalla Yalla Habibi. (Arabic words, a love song. My love, Oh My love, come on my Love)Thus begins one of the most beautiful songs that you can listen whilst wandering about the cobbled streets of my village. Maybe, while you are going to the doctor, or shopping at the “Putica” (in our dialect, it’s a very little shop). Words are accompanied by the unmistakable sound of the oriental ‘Ud (a kind of mandolin). A music that plays very slowly, melodies that go over and over, words repeated again and again, endlessly.

You can often notice, through the streets of my village, a delicious eastern smell. Chicken tajine with turmeric, couscous with vegetables, falafel and hummus, mixed up with the more traditional sauce with onions, roasted peppers, eggplant with tomato sauce, and couscous with tomato.Fragrances that blend so well, together. They allow you to go back through the centuries, remembering forgotten tales. Stories that draw from the same common root, which I only discovered recently, when my studies led me to the wonderful middle eastern world.

“We must now admit that ours is a multi-ethnic society. Our town, Maierato, is a multi-ethnic town! Our children will grow up in this reality and not another. Children can easily get used to the new, they are open to what is different from them and know, how to best deal with change. The problem, if anything, is only ours. It is we parents who have the difficulties. Maybe it is us that build walls higher and higher, between us and all that is a threat?Often forgetting that inside those walls we imprison first of all, our children. “A new school year has begun. The manager of the school met the children in their new classrooms. She gave a clear invitation to consider, or perhaps rather reconsider, our society, and in particular to think about the events that happened recently , concerning Europe and our country.

September is also a celebration month in Maierato. On the streets you can see the beautiful festival lights; people walking down the avenue; families reunited with relatives that came home from abroad, just for the occasion. The oldest church reopen after many years of renovation. Songs, masses and life that flows slowly, here as nowhere else. Activities that go on thru the night, till the first light of the new day. Days that will be the last of this summer. An Incredibly hot summer. The sea, incredibly quiet.Streets and squares come alive to the sound of the taranta (folk dance). The spicy, intense smell of sausages cooked on the grill, reaches also the farther ways, making you forget the dinner you just had, the new diet you just begun. It is a desire that does not leave you, until you satisfy it. And it does no matter if you did it last night, you could never stop. September is also this: the Calabrian sausage feast.

Walking with my husband through the narrow streets of the village, close on his arm, I surrender myself to the pleasant feeling of the warm wind on my skin. After days of sweltering heat, finally the north-east wind blows.Suddenly I am distracted and, at the same time attracted by a sound I know very well, it seems carried by the wind. Words, that are part of a specific ritual, a melody that units the singing and the acting. I tried to follow this intensity. It comes from an open window of a crumbling house. It turns to the east.Suddenly I realize: it is the chant of the Salat al Maghrib, the evening Muslim prayer. Among the old walls, warmed by the last rays of sun, echoes the Takbir (Allahu Akbar, Allahu Akbar) followed by the verses of the first surah of the Qur’an, Al Fatiha, the opening up.

For a moment I am lost in thoughts. I forget everything and I imagine I am in a distant country. I imagine Aleppo, and the minaret of the great Umayyad mosque (al-Jāmi’ al-Umawiyyī). Listening to the melodic voice of the Muezzin coming from the beautiful minaret, inviting the faithful to evening prayer. Through the modern loudspeaker his voice reaches the entire city. In a moments I make a trip of several kilometres to the southeast. Not far, indeed. After all we are so close to be often called cousins. Probably, someone in this same moment is doing the same trip of mine, but in reverse. Thinking on this, I became a little sad. It will be a different trip, which goes far beyond my imagination.

From the house then, someone recite the lines of the Shahada (profession of Muslim faith) and brings me back into the present. Prayer is almost finished. I decide to go along with that prayer, but in the language that suit me best, in my personal religious jargon, that really, I admit, is sometimes incomprehensible even to myself. I pray and hope that the sea is peaceful, that the wind would blow elsewhere. I pray, above all for that muezzin, because his words continue to echo free, safe and well, from the minaret of the Great Mosque of Aleppo, and that his words could be heard from sunrise to sunset at the most important moments of the day.

We are a multi-ethnic society. The teacher knows that. Our children will know it, they will learn it at school. We are first of all a society of survivors. Each of us has lived a war, it does no matter if a personal, political or social one. All of us, without distinction of any kind, are looking for the same thing. All of us want to live in peace. All. Everyone, without exception. 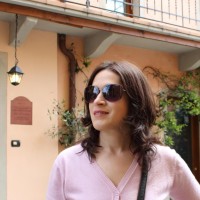